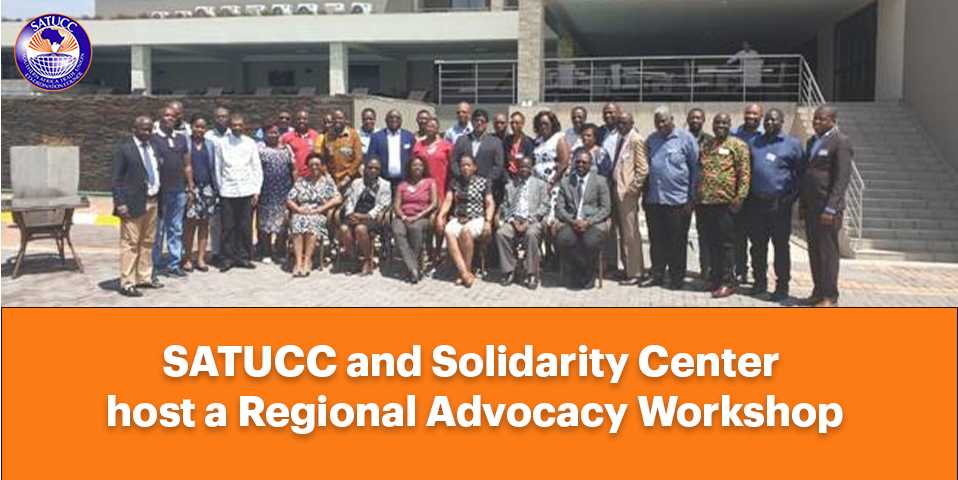 In her opening remarks, the Executive Secretary of SATUCC, Cde. Mavis A. Koogotsitse hailed the cooperation partner Solidarity Center, for its tireless support in providing technical and financial assistance to the various activities of SATUCC. She noted the importance of the workshop and set the stage to capacitate the affiliates to influence various national and regional policies through social dialogue.

The workshop noted that the regional development on Labour and Employment included the development of the SADC Employment and Labour Policy Framework (2020-2030), SADC Decent Work Programme (2021-2025); SADC Labour Migration Action Plan (2020-2025); new SADC Protocol on Employment and Labour and SADC Labour Market Observatory Initiative. An analysis of all the above-mentioned policy documents noted the growing importance of labour migration governance in the region.

Recognizing that several member states seek to be more protectionist in terms of employment opportunity by prioritizing national citizens, which has on several occasions resulted in conflicts such as xenophobia and other forms of attacks on foreigners in SADC. The SADC ELPF speaks of decent work for all, regardless of nationality, this alone makes it clear that citizens of member states have the same rights, including participation in processes of development and application of ILS’s to defend their rights and interests in destination countries.

It was noted that the SADC Employment and Labour Policy Framework speaks of regional integration, obviously focusing on aspects of labour, employment and social security portability.  W The framework of regional integration clearly states that there is a need to remove all obstacles to the free movement of goods and services, therefore, placing this issue as a pillar is a way of strengthening the ongoing discussions at the national level around labour migration and governance.

The workshop concluded with the attending affiliates agreeing to (i) Advocacy and Campaigns activities to ratify SADC protocols; (ii) Link with other countries and work on a common project to ensure that ex-South African miner workers and other workers receive their pensions through WENELA; and, (iii) Take these discussions to the country level and ensure that there is a full appreciation of what is really happening and also the full appreciation of protocols and a deliberate effort to capacitate the local unions to campaign for the realization and implementation of the protocols at the national level (domestication).