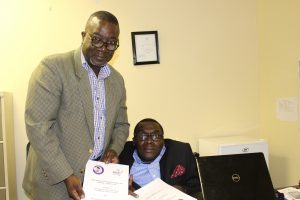 On the 19th June 2018, SATUCC officially signed a memorandum of understanding (MOU) with a regional body that represents the disabled people’s organizations (DPOs) called the Southern Africa Federation of the Disabled (SAFOD).

At the signing ceremony held in Gaborone, Botswana where both organizations are located, SATUCC was represented by the Executive Secretary, Comrade Austin Muneku while Comrade Mussa Chiwaula represented SAFOD in his capacity as the Executive Director.

This MOU provides a broader framework for joint activities between SATUCC and SAFOD on the promotion of the interests of persons with disabilities in the context of Decent Work agenda.

Speaking soon after the signing of the MOU, the SATUCC Executive Secretary remarked that this MOU was necessitated amidst a dramatic shift in the way persons with disabilities are viewed within the trade union constituency “following an increased appreciation that disability is a critical dimension of humankind and affirmation that all people have certain inalienable civil, political, economic, social and cultural rights, including labour rights.”

Against this backdrop, SATUCC Executive Council held in March 2017 in Gaborone, approved that SATUCC and SAFOD, should formally enter into a cooperation towards promoting and championing issues of mutual interests for the two regional bodies.

In light of this, from 20-23 June  2017, SATUCC participated at the Southern Africa Round Table Forum on Disability held in Johannesburg, South Africa which was organized by SAFOD. SATUCC was given a slot to make a presentation on Disability and Decent Work in SADC.